Showing posts from May, 2011
Show all

- May 23, 2011
It wasn’t a terrible storm, but it was note worthy. You see this storm had some powerful wind. Seriously! It made the night almost eerie with the way the wind was wooing and groaning and moaning and whistling. There were also some amazingly bright flashes of lightening and loud crashes of thunder. As I lay in bed listening I began to think about how powerful and amazing God is. At the same time I was also reminded of a poem that I had read in my literature written by Stephen Crane, a non-Christian. This is what he wrote, A man said to the universe: “Sir, I exist!” “However,” replied the universe, “The fact has not created in me A sense of obligation.” Basically what the poem is saying is that the universe or nature is in control and it does not care that man exists or not. It will do what ever it wants to man. It will treat man however harshly it wants to. Therefore, there is no hope for man because he is totally at the mercy of the universe and the universe doesn’t care.
1 comment
Read more

- May 10, 2011
People! I just love people. People are so unique. Everyone is different. Everyone has a different personality, a different voice, a different look, etc. No two people are exactly alike. Every single person was uniquely fashioned by God and each person has their own special uniqueness. (I love that word unique.;) ) Wouldn’t it be so boring if everyone was the same? Wouldn’t it be disastrous if everyone was just like me or you? I am glad God made variety. I love it that everyone is different even the most identical twins there has ever been. I just love it! It makes life so much more exciting and colorful and unique and special and just simply wonderful. Isn’t God so creative? We have a great and awesome Creator. Psalm 139:13-16 For You formed my inward parts; You covered me in my mother's womb. I will praise You, for I am fearfully and wonderfully made; Marvelous are Your works, And that my soul knows very well. My frame was not hidden from You, When I was made in secret,
2 comments
Read more
More posts 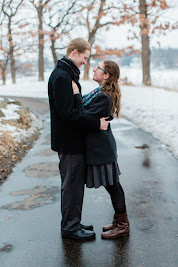